In an era when the internet spawned networking communities like geysers in a desert, Gather.com was one of the first to appear. When it was launched on the web in 2005, Gather.com was touted as a Myspace of Friendster for a literate audience, with the emphasis on content.

I first learned about Gather, when Minnesota Public Radio announced it was helping launch an online community focused on the older demographic (users over thirty). I had just signed a contract with Counterpoint NY for my first book, The Scent of God: A Memoir. The publisher suggested I join an online community to help build a platform. I knew nothing about social networking save that it was geared toward younger people. Learning that Gather’s emphasis was on the “older generation” with a focus on content of substance, I viewed it as a Godsend.

The first step to joining was coining a username. But what was a username? I muddled around a bit before hitting the “Contact Gather” link. I heard back that same day from David Cooperstein, Gather’s VP, Editor-in-Chief who gently suggested “Beryl” as my username. And voila! I entered a newly burgeoning network of users, my first “Friend” being David himself.

As my contacts multiplied, I spent an inordinate amount of time linking with Gather. We had no satellite or high-speed cable where we lived and connecting by phone was desperately slow. But I loved Gather from the start. Connecting with thoughtful, creative, and generous “friends” was like finding a family and mentor at the same time. I often worked into the wee hours of the morning, loving every minute spent with Gather members though frustrated with the time it took to load photos.

By the time my book came out in April 2006, I had developed a wonderful community of Gather friends. My very first reading/signing event took place at the Harvard Bookstore in Boston. It seemed such an intellectual place to do a reading and I couldn’t imagine how I would draw an audience for my memoir. Gather, whose headquarters were in Boston invited me to visit and introduced me to staff. That evening Gather staff joined Gather friends who lived in an around Boston and filled the space. Seeing them there, was such a relief I was no longer nervous. We celebrated afterwards with beer and fries at a local Pub.

Later that summer, Cooperstein left a message on my phone, inviting me to Gather’s first anniversary bash: a "Book It To Bermuda Cruise,” as one of their featured speakers. My husband Bill and I spent five days eating in luxury, attending shows, lounging in deck chairs with fancy drinks, and meeting people.

The return leg of the trip featured the author readings. That day, the ship was tossed likea cork on an angry sea, water sloshing from the pools, walkers clinging to the banisters along the halls. As the first speaker, I began to speak behind a podium that rolled from one side of the room to the other until a staff member led me to a comfortable stable chair. Despite the rough seas, no one evacuated their seats during my talk, hands clapped over mouths as I expected. They even waited in line to buy books until there were no more to sell or sign.

As Gather’s membership swelled, we never dreamed that Gather would not be our forever community. In 2014 Kitara Media bought it and though it intended to keep the structure alive, it soon fell apart and took most of our work with it. While some were able to rescue their work before it disappeared into the stratosphere, most of us lost our postings, comments, and lists of our friends.

Facebook offered a possible alternative, but I didn't care for its structure and kept my distance until recently, when I noticed Thomas Spainhour working to link Gatherers with their Facebook identity if they had one.  The sole purpose of this group, Refugees from Gather, is to be a “resource for Facebook users who are former members of Gather to reconnect with others from those years BF (Before Facebook).” This group is growing rapidly as he tracks down and matches possible links.

Inspired by his efforts and warmed to see names appearing that I once knew so well, I needed to refresh those early Gather memories. What were your first experiences in online networking? I imagine you have stories you want share as well. I hope you will.

Waiting for Snow in Havana 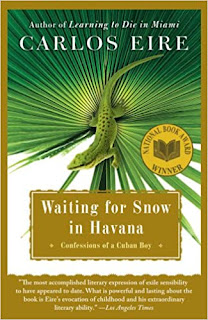 While put off at first by the violent dangerous games this boy and his friends indulged in, I became quite fond of him. He had sparkling humor that lightened the dark theme of Fidel Castro's takeover from dictator Baptista and the exodus of thousands of children who were sent from Cuba to Miami in the early 1960s, as part of a U.S. government program called Operation Pedro Pan. I was captured by the brilliant meanderings of his mind as the book progressed, taking him from the insecurity of transition to adulthood and was fascinated with his preoccupation with religion and search for a God he could believe in.