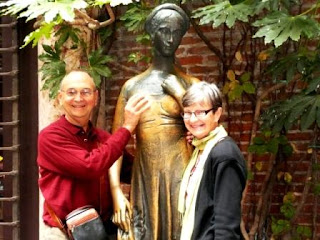 When we left for Italy, my husband Bill knew we’d be visiting my deceased husband Vittorio's family and friends. He thought maybe he'd meet five or six. By the end of the trip he'd met 24. The final batch of family members waited for us at the bus station in Verona -- Catarina, a fiery Sicilian beauty, who'd helped me connect with many of these relatives was there with her equally spirited mother Maria Rosaria. So, too was a pensive Livio (Vittorio's nephew) and his vivacious wife Marilena.

Perhaps it was the presence of the Sicilian faction that added the spice to our visit, making it one of the most memorable; perhaps it was the four women in Livio’ s life. Whatever the seasoning, the arguments, laughter, and singing that punctuated the time we spent in Verona that made it the day Bill and I recall with the greatest delight. 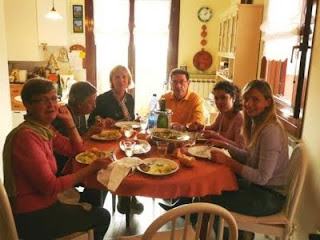 How Livio’ s family loved their “discussions.” Livio’ s women argued with Livio about what to see and how to get there with as much determination as Livio insisted on a different itinerary. Meanwhile, Bill’s camera panned from one event to the next, capturing the human interactions that so delight him. They continued to wrangle as we walked from cathedral to square – Livio proudly pointing out the restoration projects on which his son Alessandro (Catharina’s husband) was working – the women suggesting other routes. Arriving at the Casa de Giulietta. Livio insisted that Bill should pose for a photo with his hand placed strategically on the breast of her well polished statue, while I joined him. Note the dubious smile. Men and breasts. From babyhood to old age do they ever get over their love of the female breast?

Lunch at Livio’s was punctuated by more exuberant discussion about what to see next, Marilena—knowing exactly what he was up to with his camera--peeped over our heads, grinned at him and waved. With Torricelli as our destination, we headed off in separate cars: the men in one, we women in the other, both groups certain that they knew the way best. While climbing the steeply cobbled streets we met and, amicable that we’d both done “good,” proceeded to the top. From under the balustrades of the old Austrian castle at the summit, we viewed the city of Verona shimmering below us against a backdrop of golden dusk, lights twinkling from windows along the quay and bouncing in brightly colored streamers over the River Adige. 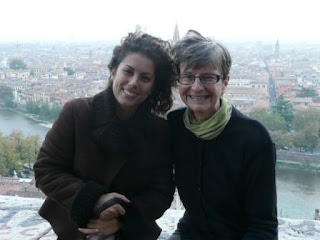 Supper that night, a succulent Sicilian veal, was punctuated with stories of the past. When memories touched on the years when Vittorio and I met and fell in love, Maria Rosaria leaned back in her chair and sighed, "Ah, Amore." I looked around the table at the family gathered there with my Bill and was flooded with gratitude that love wields such power in Italian families, embracing all the facets of life lived to its fullest. 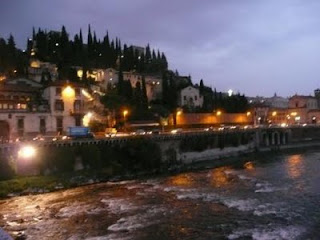