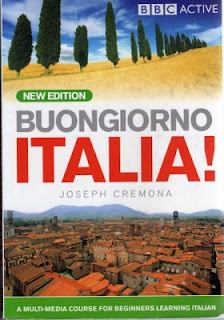 For several weeks now, I've been mostly living in earphones, attempting to learn enough Italian to communicate with my deceased husband's family in Italy. Besides CD's Buongiorno Italia also provides a reading supplement. I've completed all the exercises in the book but find myself strangely tongue-tied when asked to "say something in Italian."

Do I treat the listener to an "ordering a meal" dialog (lots of meal-ordering, and direction-asking in this little book) or do I describe the house that Geraldine wants to buy near Orvieto?

Sometimes I create imaginary conversations as I busy myself with other things. Inevitably, however, I lurch off into Spanish. I don't know a lot of Spanish, just enough to confuse others.

The dialogs on Buongiorno Italia, however, aside from the repetitiveness of their topics, are marvelous aids in determining where to use "da" or "di, " or "ci" and "si," and the like. Hear a phrase often enough and the association of when to use what slides into a conversation more easily. Those phrases remind me of the "embedded" reporters during the Iraq war save that this reporter resides inside my head.

If all goes as planned, we leave this Sunday. On my return, I'll report on the efficacy of Buongiorno Italia and my success in attempting to communicate in Italian.


Mario Perez has been driving taxis since he was fourteen. The chauffeur assigned responsibility for the safety of Bill’s consulting team, Mario works eighteen- and twenty-hour days. As he cannot afford a car of his own, he must take some other form of transport to and from work, which means his day starts at and ends after . He never complains. Such hours are just a fact of life.

I met Mario in May 2000 on a whirlwind trip to . This trip included a day spent with my husband Bill at work—attending meetings, touring site facilities, meeting fellow consultants and team members, a day alone spent touring the awesome National Museum of Anthropology, and two days of compressed sightseeing in which we visited various ancient sections of the city, shrines, pyramids, and a day trip to the distant mountain city of Taxco. But over-riding the experience of such wondrous and memorable sights was getting to know the Perez family.

Mario’s broad face beamed next to Bill’s from the other side of the custom’s checkpoint when I arrived at Wednesday night. Although I’d never seen Mario before, there was no missing the delight that emanated from that wide smile. Bill had described it often enough. I was to bask in the warmth of that smile during the next two days.

By Friday, I felt confident enough of the understanding couched in that smile to babble away in my dreadful Spanish, certain that Mario understood everything I was saying. As he explained the details of the trips he had planned for us that weekend, however, I struggled to grasp its outline—the grandchildren, eight-year old Giovanni and nine-year old Stefania, who would join us on Saturday as we toured the city; his wife, Margarita, who would accompany us to Taxco on Sunday.

On Saturday, Mario arrived early with his two grandchildren and set off with us for the pyramids of He dropped us off in front of the pyramids and assigning us care of his grandchildren, drove to the parking lot to wait for us. His legs were giving him trouble and there would be a lot of walking.

We were well into our adventure when, while climbing the pyramids at , Stefania got her outfit dirty. Just a smudge, mind you, but she was preoccupied with this dirt. I helped her wet a paper towel and we tried to remove the smudge but without much success. I retain a vivid image of this little girl as she rubbed at her shorts with a dampened piece of paper towel. I tried to ease her worry by saying that it was only dirt and would come out in the wash, but this didn't comfort her. She was wearing her best outfit and her mother had told her to keep it clean. Her parents probably sacrificed so that she'd be well dressed for this event, and I felt badly for her.

As Stefania and I worked at the dirt on her shorts, Bill disappeared into the heart of the museum with Giovanni. Worried about losing them, I gave Stefania my handkerchief and suggested she use that. Still busily rubbing as we entered the room where a huge model of Teotichuacan stretched below us, Stefania somehow lost hold of the handkerchief. It fluttered through a space in the glass floor over which we walked. It landed neatly on top of a temple roof and covered its steps. No amount of stretching could retrieve it. 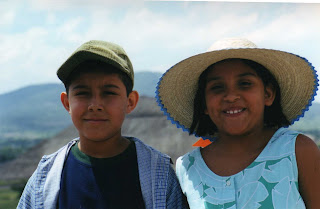 Other tourists who had purchased ornate spears from the vendors at the pyramids, attempted to lift the handkerchief for us without success. It doesn't matter, I said, taking Stefania by the hand. Let's go find Bill and Giovanni. But Stefania wasn't to be deterred. She insisted we stay until the hankie had been rescued. Finally a guard, who sat beside an open tomb where the skeletons of five ritually slain maidens lay exposed, took a hooked stick and sauntered toward the spot where the hankie languished-- its retrieval apparently just another fairly routine event in the life of that museum guard.

Though I usually focus on away-from-home travel stories, travel stories from one’s home state are worth the telling. Ely is one of those places. Since taking my grandson there last year, I returned again this summer, this time with two grandchildren in tow. Here’s a story from that first trip in August 2007.

Ely is more than the entry to the Boundary Waters. Ely is home to Ted, a local celebrity who could once shimmy up trees with the best of them. He could gambol in play and run faster than others. Ted can no longer do these things because he weighs 900 lbs. Before you gasp in disbelief, I’ll reveal his identity. Ted is a black bear – a VERY LARGE black bear. Most wild male black bears weigh between 125 and 500 lbs. But Ted cannot be called wild. He is now a main attraction at the North American Bear Center in which opened in the spring of 2007. 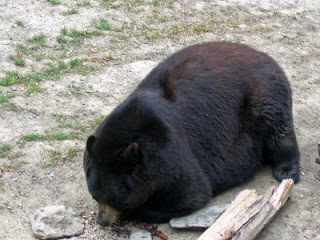 When I left our North Shore home to drive 90 miles to Ely with my nine-year-old grandson Tommy, I’d planned on taking him to both the International Wolf Center one mile east of Ely and the Bear Center one mile west of Ely – stopping to visit the Dorothy Molter (better known as the “Root Beer” lady who achieved fame by living alone in a rustic cabin on a small island in the Boundary Waters until she died at the age of 87) Museum between both centers to refresh ourselves with a chilled bottle of her “Kwiturbeliakin” (Quit your belly-achin’) brew as had the more than 7,000 canoeists who stopped by to visit her every summer when she was alive. I planned to do all of this in one day. 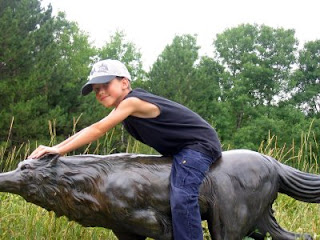 Tommy Rides the Wolves in Ely

So much for plans. When my watch read 4:30 p.m. and my grandson was still clinging to the center windows trying to catch sight of the white wolves who were lazing about in the shade of their forested enclosure, I had to lure him away by promising him a cold root beer.

We arrived at the Dorothy Molter museum in time for the last guided tour. Nancy, our guide, had grown up in Ely and knew Dorothy Molter well, becoming part of a sizeable group of snowmobilers who would head out to Dorothy’s cabin every winter to help her cut the lake ice she’d store in her ice-house for chilling her homemade brew. When the Boundary Waters were closed to motorized vehicles of any kind and Dorothy’s fame allowed her to spend her final years on the island, the forest service and Outward Bound groups took up the slack – “though, truth be told there were a few snowmobilers who helped then too.”

My grandson, who fidgeted through the documentary on the wolves of Ely, sat spellbound during the presentation. He was especially impressed with the fact that Dorothy had to make several portages to get back to her cabin from a supply run to town -- carrying a 60 lb. pack of supplies strapped to her back, a 60 lb. pack strapped in front, and her 80 lb. canoe balanced over her head. He began calling Dorothy “that root beer girl,” in honor of her prowress. 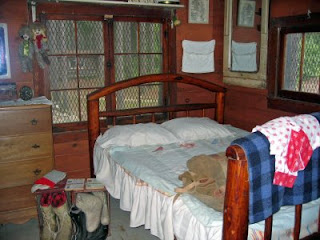 We stayed overnight at a small motel, had supper at the Chocolate Moose, played several rounds of mini-gulf, watched Ice Age (the movie) on the TV and after breakfast the next morning, (also at the Chocolate Moose) we headed to the North American Bear Center, arriving in time to see the bears being fed. Ted, who is the gentlest and the least agitated by the presence of humans, dined next to the window-wall which overlooks the two-acre bear enclosure. Ted -- who did not wolf his food as might be expected in a bear his size and took 10 minutes or more to dine one pile of berries -- is not the only bear in the enclosure.

A large light colored female black bear known as Honey Bear dined in the field behind the bears swimming pond, coming out of the woods and into the wild flowers only when she needed a sip of water from the pond. 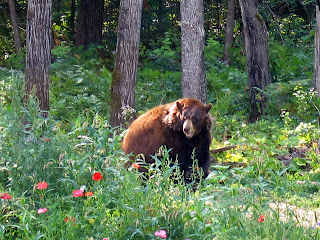 Honey Bear is an impressive lady but prefers solitude to humans.

Meanwhile, a very small bear cub was being coaxed down from his high perch in a white pine. This little guy is not related to the other bears and much prefers humans to the grouchy Honey Bear, avoiding even Ted (who makes friendly overtures) so he spends a lot of time in trees, coming down only to be fed his bottle and berries, or to run after the caretaker as she leaves, standing mourning at the gate through which she has passed.

We spent the entire day at the , which – like the -- is rich with interactive displays and story boards. Throughout the center monitors show bear activity in the area. And there is a “cub” room where even nine-year-old grandsons can hang out and play at being bears. Was it Dorothy in the Wizard of Oz who chanted “Lions and Tigers and Bears, oh my!”? My grandson’s and my two-day trip to the wildlife centers and Molter museum in Ely made it a “Wolves and Bears and Root-beer, oh my!” kind of happening in 's Ely Oz. 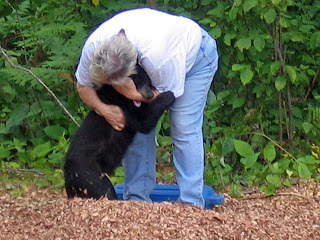 This little guy loves bear hugs -- as long as they are human.

Adapted from an article published on Gather