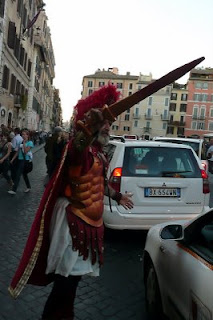 We spent most of our first full day in either walking or standing. Having spent hours waiting on line for our tickets to the Papal audience, and flying through the Vatican museum before it closed, we stopped for some refreshments at a small cafe at the base of a long flight of stairs leading to the Metro. As Bill had never eaten gelato before, we ordered cups of mocha/chocolate gelato. Bill was so smitten that gelato in different flavors became an afternoon tradition for the rest of our journey.

Photo of a Roman Soldier out of his element

When we arrived back at the Piazza di Spagna we encountered an irritable Roman Soldier who’d somehow arrived there from the Roman Forum and was directing traffic with his sword and swearing at a huge group of chanting youth crowding the intersection. We hurried past him to our apartment where we rested until it was time to go in search of supper. 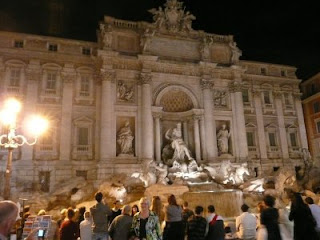 Fountain of Trevi at Night

“Where shall we go?” Bill asked. I suggested we head toward the Fountain of Trevi – a glorious sight at night and one Bill must see. Certainly there would be a good restaurant there. We headed out, confident we could find the Trevi Fountain by following the city map in our “Let’s Go” guide – a task not so easy at night when the print is small and the city streets dark and often narrow. It was the sound of rushing water that verified we were heading in the right direction. The fountain is huge and the water cascading from it voluminous. At night the fountain shimmers in blue and white light and the immense statues of , the sea-horses pulling his chariot and guided by Triton seem lifelike. Caught up in the visual, I forgot the tradition of standing with back turned to the fountain to toss a coin over one’s shoulder to make a wish. 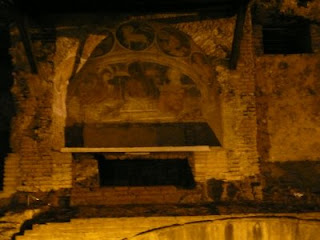 Unwilling to merge with the throngs of tourists crowding the nearby restaurants, Bill and I walked in the general direction of the Piazza Venezia, a busy thoroughfare over which looms the Monument to Vittorio Emanuele II, erected over archeological ruins to celebrate Italy’s unification.

It’s not easy to cross the streets in Piazza Venezia. The traffic there is fast and heavy, so, though we headed in what we thought was the direction of the Coliseum and Roman Forum we ended up walking past the Capitoline Hill and the Theater of Marcello (which that night I thought was the Coliseum) and ended up near the Jewish Museum in the Jewish quarter next to the Tiber. This was a fortuitous turn of events for it was there that we finally found a place to eat. Nona Betta is an “authentic kosher restaurant” with empty tables on the sidewalk that beckoned to us to “sit and eat.” Which we did with great joy, dining sumptuously on penne picata, gnocchi parmesan, and a fennel, radiccio and orange salad. 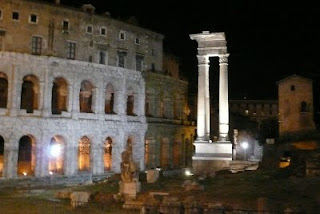 It was after 10 p.m. when we finished eating. Unable to find a taxi, we began our long walk back to the Piazza di Spagna and our apartment, on the way passing the Teatro and Area Sacra Argentina, and the Pantheon.

The Vatican and a surprise encounter 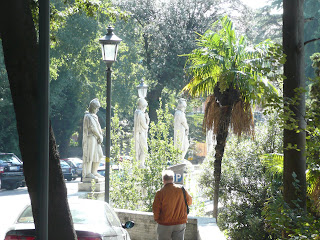 We woke late on Tuesday, the morning after our arrival -- though considering the time difference of six hours it was not late but quite early: nine a.m. in equals 3 a.m. in . It didn’t take Bill long to figure out how to make a great cup of coffee in the small espresso maker at the apartment and the butter, peach jam, and dry tostinis, (what we think of as Melba Toast), comprised the balance of our breakfast. Then we were off to the Borghese Gardens and Piazzo del Popolo for a two hour morning walk. 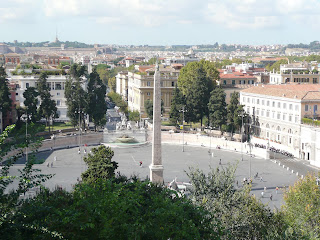 Piazzo del Popolo as seen from above in the Borghese Gardens.

The Pizzeria on Via Babuino where we had lunch of 4 plates of different roasted vegetables. 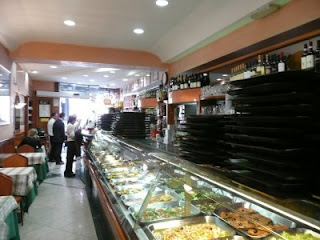 Our parish priest from Grand Marais, had written a letter to the recommending us for an audience with the Holy Father for Wednesday. We had been subsequently notified that we were to pick up our tickets at the “Bronze Doors” between two and 4 p.m. on Tuesday afternoon. Though it was probably just as easy to walk, we took the Metro from the Piazza di Spagna to the and joined the long lines of tourists and pilgrims waiting to clear security. While shifting from foot to foot (I’m not good at standing still for hours), I overheard the woman behind me talking enthusiastically about the pilgrimage to Assisi where she’d been present for the spectacular celebration of the feast of St. Francis. , being the town I most desired to visit – the source of the Franciscan tradition in which I’d lived for 15 years as a Poor Clare nun -- I turned toward her. 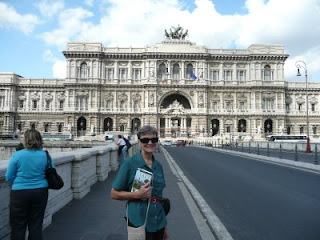 Beryl on the bridge on her way to the Vatican

The trite expression we use to describe the event that ensued is “It’s a small world,” but my encounter with a nun from the same monastery where I’d spent 15 years of my life made the world seem miniscule. This unexpected meeting while waiting at the spread an aura of blessing over the trip that Bill and I had begun the day before.

Sister, who’d been granted a few extra days in Rome before returning to the cloister in New Jersey, had acted as a tour guide on a Franciscan pilgrimage to share the perspective of St. Clare’s life in conjunction with that of St. Francis. Those on that pilgrimage told her afterwards that they’d gone to to “to meet Francis and had met Clare as well.”

It was late by the time we entered the bronze doors to claim our “invitations,” to the Papal Audience. Here’s a bit of advice for those hoping to attend a general Papal Audience: Forget the tickets -- we were never asked to present them at the actual audience the next day. Spend the time visiting the Vatican Museums instead. Having spent hours waiting on yet another line for those “tickets,” we had little time to visit the Vatican Museums before they closed. Bill and I were among the last persons allowed to enter the museums and then we had to “fly” through that immense labyrinth of art-laden halls in our desire to reach the Sistine Chapel (which is one of the final stops within the museum) before the museum closed at 4 p.m.

Is there ever a “good time” to visit the Sistine Chapel? I have no idea. Thirty years ago when I last visited there weren’t the crowds there are today. As Bill and I craned our necks to view Michelangelo’s ceiling, we were pushed about by the milling crowd. Bill even missed seeing the most famed fresco of all – the creation of Adam which is tucked among the other portrayals of saints and sibyls adorning that ceiling. Certainly we could have seen more through reproductions in books and online, but then we would have missed the sense of awe that standing in the presence of Michelangelo’s frescoes evokes.

We arrive in Rome 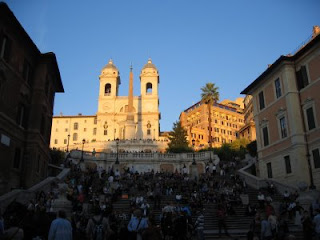 My husband Bill and I have just returned from a three week journey to . During that time, we traveled through , the , the Italian Riviera, the Italian Alps, and . We met with 24 of my deceased husband Vittorio’s family members and network of friends, got hopelessly lost, made innumerable mistakes, encountered several unexpected acts of kindness, ate incredible meals, and everywhere were surrounded with scenes of great historic and artistic resonance and of unutterable beauty.

Our first four days were spent in in an adorable apartment (Casa di Stella on Via Mario Fiori) only a block away from the famed Spanish Steps. From there it was an easy jaunt to most of the important sites in the city, and the Metro and bus lines were nearby for longer trips within and without the city.

We encountered our first challenge at the luggage pick up. We could not rent a luggage dolly which cost 50 centavos because our lowest denomination euro was € 100 bill. Lesson number one: always bring smaller euro bills and coinage with you. Because we could not rent a dolly, Bill tried to piggyback our other bags onto his new oversized bag which handle promptly cracked off. Lesson number two: do not plan to piggy back more than one bag at a time.

I sought help at the information desk, which was, of course, empty. A passing janitor threw up his hands when I asked him if he had change. He went off muttering something about crazy Americans . . . and then surprised us with the first of the many kindnesses Bill and I would encounter on this trip. He paid for a dolly himself and brought it to us!

We took a shuttle to the apartment, a ride that should have taken 40-50 minutes but which actually took close to two hours because of other passengers requiring drop-off’s hither and yon. We were told the cost would be €45. With a tip, €50. Problem: the driver didn’t have €50 in change. Lesson number three: take a taxi. It costs around the same, you get there a lot faster, and the driver is more likely to have change. While we scrambled to find someone who could break our €100, the shuttle driver nervously pointed out that he was blocking other traffic from entering or exiting the narrow street below the apartment. The apartment owner, Carlo, helped us break the 100, then helped us haul our luggage up the three stories to the apartment. Hauling heavy luggage that far, even with the help of the owner, was not easy.

Finally settled, Bill and I walked to see the Spanish steps (down which Vittorio had ridden his bicycle as a kid) at night. Though October is not considered a busy season for tourists in the steps were packed with people, some exceptionally boisterous youth singing loudly. One of the ubiquitous rose vendors found throughout , handed me two roses for “amore,” expecting to be paid even though he insisted they were free. 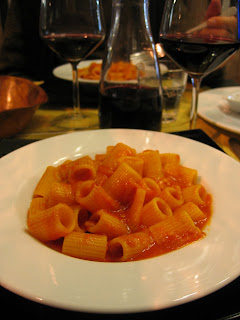 We climbed the steps to the famed Trinita dei Monti, where 30 years earlier I’d stayed in an attached convent while Vittorio wrestled with the in trying to obtain a dispensation from the priesthood so we could marry. We passed the Hassler Hotel, and connected with Via Gregoriana, the street where Vittorio’s family had lived for over 100 years. 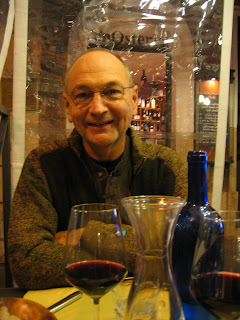 On a nearby side street we found a cute little restaurant Carole Case e’n Osteria where we sat at a small table outside on a platform above the sidewalk and ate bambollot all’amaticiana—a type of fat ridged pasta with a spicy roman sauce made with bacon, sipped a delicious glass of vino rosso della casa, and carried on a lively conversation with a woman from Norway who lives several months a year in Italy – all together a wonderful introduction to the days to follow.