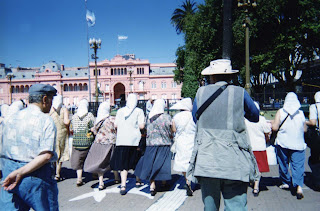 In early December 1999, I flew to to meet my husband Bill who was working in . I arrived to find the streets of the city blockaded by banks of police and their motorcycles. Helicopters stuttered overhead. The taxi driver told me it was inauguration day and 's new president, Fernando de la Rua, was moving in ceremonial cavalcade toward to Plaza de Mayo. To get me to the hotel, the driver had to convince the police that we had authorization to enter. I sat very tall and tried to look important as he nervously talked us through.

I'd like to tell you that I immediately dashed into the crowds to watch the inauguration. I’d like to boast that my Spanish was fluent enough to allow me to understand the speech de la Rua made from the balcony at the Casa Rosada. But the reality was that I was fearful of going into the city alone.

Then reason kicked in. I was going to be there for 10 days and Bill would be working most of that time. It was either head into the crowd or spend my vacation at the hotel swimming pool. I chose the crowd.

By the time I found my way to Plaza de Mayo, all that remained of the festive crowds were metal barricades and a ground littered with celebratory paper and political leaflets. I bent down to pick one up and noticed that it lay on what appeared to be the outline of a human body painted on the paving stones. Inside this outline were a name and a date. These painted figures were everywhere. When I straightened up, I bumped into a woman standing near me. I wanted to ask her what these figures symbolized but my Spanish was limited. I'd spent the last two weeks studying phrases like the one that discusses the peculiarities of keeping an elephant in one's house . . . not exactly the words I need now.

I excused myself for bumping her and began to walk away, but she smiled. Encouraged by the warmth of her smile, I decided to use my fractured Spanish to ask her what the symbols meant. 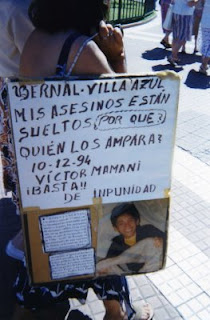 "Ah," she replied, "they are 'los desaparecidos.'" The disappeared! I shuddered. She then took me by the hand and lead me toward the Plaza obelisk where there were other symbols – she told me that the doves were actually kerchiefs. The "panuelos blancos" that symbolize the mothers of "the disappeared" who, since the mid ‘70s have gathered every Thursday in Plaza de Mayo to protest the disappearance of their children.

We sat on the grass to talk because Esther had phlebitis and though she had been warned by her doctor to stay at home with her leg raised, this retired history professor refused to miss such an "important event." She had traveled by bus since early morning from a mountain town several hours away.

We spent the rest of the afternoon together, wandering through historic sites and chatting, and as we talk the barriers imposed by language crumble. I bless the spirit that urged me away from the hotel and into the square. It has enabled me to do what I love best -- to see a place through the eyes of the people who live there.

See Finding Time for God for Beryl's blog on living a contemplative life in a busy world.

The Argentinian and Brazilian views of Iguazu Falls 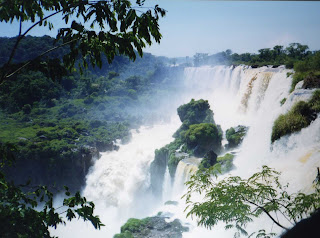 In December 1999, I had the opportunity to practice the special blend of insecurity and trust that seems be to the hallmark of an American tourist in . A good example concerns our trip to the northeasterly tip of to view one of the world's greatest wonders: the immense and mighty Iguazu located in the lush subtropical jungles of and .

To get to Iguazu, which is in Misiones province, we had to fly over , a province that had just erupted into armed violence and which lies directly south of Misiones. Would we need to detour or abort the flight because of the violence in the neighboring state? My worries dissolved as we flew without hitch into Iguazu, only to resurface as we boarded the tour bus that was to take us into the jungles. From there we would be able to view the Garganta del Diablo (the Throat of the Devil): the most fearsome of the falls, forming as it does a huge concave gorge over which the Iguazu river hurls, spewing spray so high it can be seen from miles away.

The cause of this malaise was our bus driver who insisted that we give him our airline tickets. He claimed he needed them to confirm our return flights. I wondered why a bus driver would be responsible for confirming flights that wouldn't take place until the following day. I worried even more about getting them back. Refusing to yield, I clutched the precious tickets tightly. Not until another and more experienced tourist told me that this was normal procedure did I give in.

The following day, despite the fact that although all the other tourists had gotten their tickets back and ours were still missing, we decided to trust yet another stranger. When we'd decided, at the last minute, to fly to Iguazu we'd not had enough time to get visas to enter . It was only after we'd arrived in Iguazu that we discovered the Brazilian side of the falls should not be missed. The tour agency, however, refused to take us without visas. So, at the instigation of a desk clerk, we sought the help of Omar, an immense and very friendly taxi driver who said he'd try to get us in, mentioning that there would be no charge if he failed. His assurances were not reassuring. I worried more about spending Christmas in a Brazilian jail than spending money for an unsuccessful trip.

Democracy in South America is a far cry from that in the --only two days earlier I'd marched with the Mothers of the Plaza de Mayo, whose children (more than 30,000 of them in alone) had been abducted, tortured, and murdered by South American governments. The number of "disappeared" keeps growing and those responsible have never been brought to justice despite the 29 years of weekly marches these Mothers have organized.

Our Goliath had no trouble getting us across the border but the affair of our abducted tickets was not so easily settled. We arrived at the airport without them. It wasn't til just before boarding time that I spotted the bus driver nonchalantly hanging around outside the terminal. While I guarded the luggage, Bill ran outside to get him, reaching the bus just as that driver pulled away from the curb. Without asking for identification, he handed Bill the tickets and drove off. Unlike the Mothers of the Plaza de Mayo, our wait yielded the missing tickets but those mothers continue to wait for something incomparably more precious. I thought of them that Christmas, as I give thanks for the birth of the child whose mother also suffered that we might live free and in peace.