Morning at the Boyce Thompson Arboretum in Phoenix

On a bright March 15 morning, we traveled east from Phoenix on Highway 60 to visit the Boyce Thompson Arboretum where desert plants from around the world are featured in landscapes reflecting other desert environments – 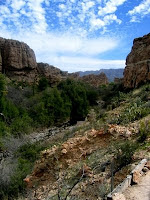 Africa, Australia, South America, the Canary Islands, and the Chihuahuan desert of Mexico, west Texas, and southern New Mexico. My husband Bill and I got so carried away that we took well over 100 photos. Don't run, I'm only posting a couple here! 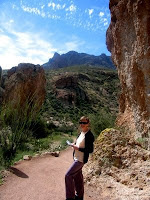 My favorite landscape and hike was the High Trail through the Upper Sonoran Natural Area. 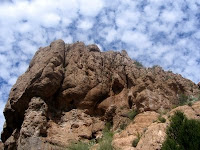 The rocks looked like they’d been poured in blobs from some heavenly sand bucket. 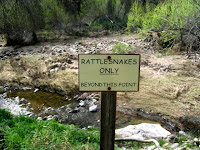 We saw no rattlesnakes but we didn’t go looking for them. Besides, from what I understand rattlesnakes don’t show themselves until it gets a bit warmer. 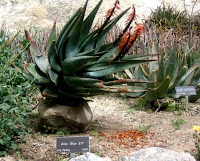 The photo to the left is of a Blue Elf Aloe (pretty big for an elf wouldn't you say?) 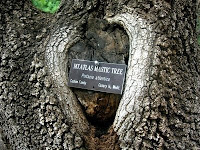 And, check out the bark on the Mount Atlas Mastic Tree to the right. Beautiful even if it resembles anf elephants hide.


Several hours of browsing through the Arboretum aroused in us a “powerful thirst.” so we traveled to the historic mining town of Superior AZ – not quite a ghost town but almost -- with the only affluence reflected in the Church of the Latter Day Saints. 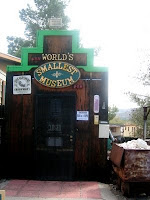 The town center was restaurant free, so we headed back to the highway and stopped at Buckboard City Café, which also boasts the world’s smallest museum.

The café’s charm lay not so much in its food which was hearty and good, but in its ranch town frontage, rustic interior, and the amazing sculptures built from discarded household, farming, and mining paraphernalia.

The lovely piece to the right is called Hard Labor Falls, though I was hard pressed to find any falls trickling from those wheelbarrows.

Satiated, we were ready for our next journey, this one to Saguaro and Canyon Lakes, the subjects of my next post.

The Star Tribune named Beryl as a "Best of 2006 Authors." Her book The Scent of God was a “Notable” Book Sense selection for April 2006. She is a columnist for the News Herald and has been published in anthologies and periodicals nationwide. See Road Writer for her travel blog. 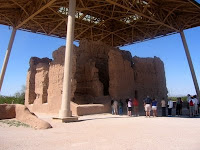 As soon as I arrived in Phoenix, having escaped yet another Minnesota blizzard in mid March, my husband Bill and I set out for Tucson to see the Pima Air and Space Museum, a trip which excited him more than it excited me. However, while on the way, a sign announcing the Casa Grande Ruins National Monument -- an amazing Native American Structure built around the year 1,000 A.D. when Leiv Erickson was landing somewhere along the coast of Newfoundland sent us on a several hour detour (how could I let a national monument pass without stopping?). 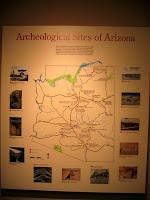 The interpretive visitor center at the monument is impressive with its large selection of beautifully presented exhibits on the life of the ancient Hohokam farming community that built the mysterious Casa Grande -- yet another example of the wonderful museums and interpretive centers found in our national and state parks for which I felt a great deal of gratitude. 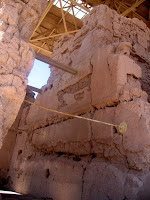 Built without metal tools, the Casa Grande -- with four feet thick walls to support four stories, was built by ancient natives who somehow moved more than 30,000 tons of the rock-hard caliche found in the area, softening it with water and carrying it to the site where they had to work quickly to shape the huge blocks before the caliche dried. These natives, obvious engineering geniuses, also created an irrigation system of over 300 miles to carry water from a mountain lake to their desert farms – a canal system that is still in use in some places around . 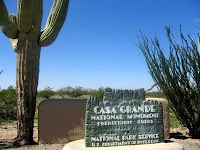 Because we stopped at Casa Grande, and because was farther away than we expected, we arrived at Pima Air and Space Museum just as it was closing. Instead of walking past hundreds of beautifully restored airplanes and bombers, we got to drive past miles and miles of junked planes on the other side of the road.

We stopped at the El Mercado shopping center in Tucson to dine sumptuously (I had an amazing combination of Mexican style seafood specialties) at El Charo on a rather strange covered terrace that reminded me of the rustic seafood huts lining tropical beaches on Caribbean Islands.

Tired but well fed, we drove the 100 or so miles back to and toppled into our comfortable hotel beds. Our agenda for the next day (and my next post) concerns a walking tour through the Boyce Thompson Desert Arboretum State Park 55 miles due east of Phoenix.

Visiting the Cloisters in New York 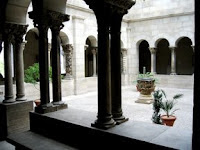 When the weather was fine, I loved walking New York’s cross-town, uptown, and downtown
streets getting from one Pen Festival event to another. But when the weather was lousy, I learned to ride the subway: to read a subway map, to decipher what routes to take, to buy a pass, find the right platforms and transfer to another train.

I also learned that subway riders still yield their seats to the aged and infirm because they always stood so I could sit (not that I consider myself either aged or infirm). Sitting on a wildly swaying subway car that jars to stops and lurches to starts has a distinct advantage to standing, even when supported by a wall of standing riders like oneself. 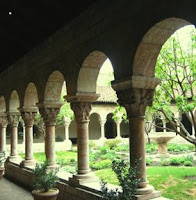 On Sunday, May 4, the day I was to fly home, I decided to ride the subway uptown to 190th Street to visit The Cloisters in Fort Tyron Park.

To get to the Cloisters, I needed to take the E train to Grand Central Station, then transfer to the A train to 190th Street. I didn’t know that on weekends the A train doesn’t run to 190th Street, that one has to exit at 168th Street where a shuttle bus would complete the rest of the trip. What I also didn’t know was that there were two shuttles, one going to the 190th Overlook Terrace station within the park, and another that went elsewhere. Guess what one I got on?

When I asked for directions to The Cloisters, my bus driver was perplexed. “I’m going to the Cloisters too,” the pretty teenager behind me added. "I'm supposed to meet my class there. I took the train in from Long Island."

By that time we’d already passed 190th Street (no bus stop there!). The bus driver pulled to a stop and told us to head "that way." He waved his hand vaguely toward the west, so we walked back to 190th and headed west, finding ourselves in a residential neighborhood at the base of a cliff. I told the teen that I knew the cloisters "overlooked the Hudson, so they must be up there." I pointed upward.

"They are? Why are there no signs?" she said. She obviously didn't trust my information. She was worried. She was already 40 minutes late. What if her class had already left?

How did I know why there were no signs? I was as stymied as she was. I don't think my "It's got to be around here somewhere," reassured her.

"Are the cloisters around here?" I asked two young women pushing baby strollers.

They didn't know but told us there was a park "up that way." Anna, the teenager and I turned in the direction of "the park," and eventually we found a stairway leading up.

Still no signs. We climbed a mile or more of stairs. We encountered a lady walking a dog. She told us we were heading in the right direction. "I better take you there," she said. "Too many paths that might confuse you."

Anna and I sighed with relief. We'd made it. I lost sight of her there as she hurried off to find her class. There were several classes touring the site, but though I looked for her among them as I walked through the museum, she never reappeared. 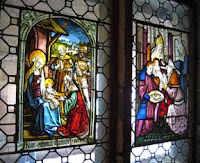 I lived in New Jersey for years before moving to Minnesota 30 years ago but had never visited the cloisters which were built in 1938 to house art works from the Middle Ages within a structure replicating their original functions: cloisters, chapels, great rooms , gardens. Original stone portals, asps, cloister pillars, and courtyards and astounding sculptures, windows, tapestries, paintings, and manuscripts. My journey through this work of art was one of prayer, awe, wonder, and peace.
- June 04, 2008 5 comments: