A pick-pocket in Rome 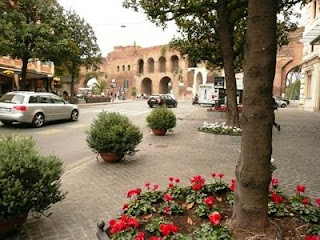 Although we’d spent five days and four nights in Rome at the beginning of our trip to Italy in October 2008, we had still not visited several of the city’s major sites, gaps which we planned to fill on the last leg of our journey when we’d spend two more days in the city.

Arriving in Rome from Siena in the early afternoon, we settled in at the Marriott on the Via Vittorio Veneto, then headed to the rental agency to return the car. Throughout our trip, we’d worried periodically about how we’d explain the scratch that mysteriously appeared on the passenger's door in Naples. After leaving the car with the attendant for inspection, and headed to the office to await the final charges and explain the scratch. The manager waived away our concerns. The contract remained as originally quoted and additional charges never appeared on our credit card statements. Apparently, scratches are expected or covered. 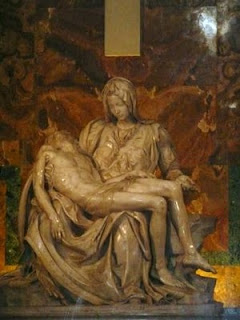 Relieved that we’d not been socked with a big repair bill, we took the Metro to Vatican City to visit St. Peter’s Basilica. Having walked through many sacred sites in Italy, I was surprised by the silence within the vast spaces of the Basilica – the only sounds those of heeled shoes and an occasional whisper and the guard who scolded Bill for taking a photo of the Pieta. Having visited the quarry where Michelangelo chose the block for this sculpture, and knowing of Bill's thrill at that experience, I was delighted that he'd managed to take the one shot he'd most treasure.

We visited the Pantheon after St. Peter’s and the difference was almost shocking. Despite signs asking for silence in that “sacred place,” the Pantheon’s walls ricocheted with the voices of hundreds of tourists and tour guides, even the audio guides we’d rented were difficult to hear in the surrounding din.

Returning to the hotel, foot sore and weary, we phoned Teresa, my deceased husband Vittorio’s niece, and made plans to meet with her and her companion Giulio for supper. We rested for a while, then showered and went down to the lobby to await their arrival. Giulio was strangely subdued in the beginning, not at all the flamboyant persona we’d met during our first days in Rome. He was probably wondering why we had to get together once more, having spent two full evenings with us when we first arrived in Rome. As the evening wore on, however, he grew more loquacious and by the end of the evening he and Bill were both singing German drinking songs, leaning into each other and belting out “Ein prosit zur gemütlichkeit” as we headed back to the hotel. 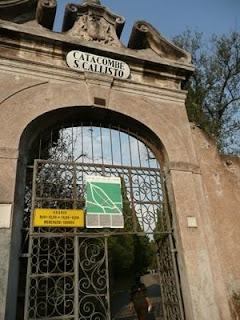 We’d been warned to beware of pick-pockets and gypsies in Rome and had been careful, keeping our valuables in thin money belts beneath our clothes. By the end of our trip, however, we’d grown lax. On our last day in Rome, somewhere between the Catacombs of St. Callixtus and the city, Bill’s wallet was stolen. The theft was a work of art, the thief getting inside the many zippered and flapped carry- case that Bill wore around his neck so skillfully that Bill nor I noticed the theft.

Despite broken luggage, an unexplained dent in our rental car, difficulties with the cell phone we’d bought to use in Italy, getting lost more often than we cared to admit, and Bill’s wallet being pick-pocketed somewhere in Rome, we’d visited places rife with memory and created memories of our own. And, though I’d returned to Italy without Vittorio’s children as I’d promised 30 years earlier, his family had embraced both Bill and me with gratitude, laughter, and tears.

That night, as we prepared for bed and our 3 am departure the next morning, Bill took me in his arms and praised my efforts in planning our journey. “You my beautiful Beryl have given me the trip of a lifetime. You are the best and the most brilliant tour guide I could have ever imagined.”

Loathing to end the re-creation of that momentous journey of return, I have taken a year and a half to narrate the highlights of a journey lasting only five weeks. But here this story ends to make way for the telling of other stories.
- March 29, 2010 4 comments: 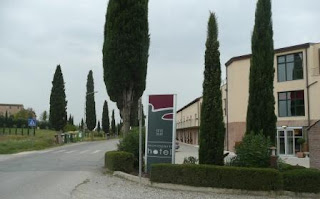 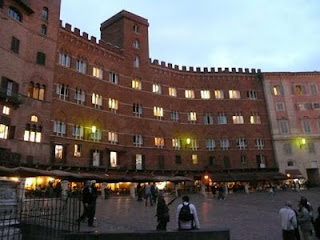 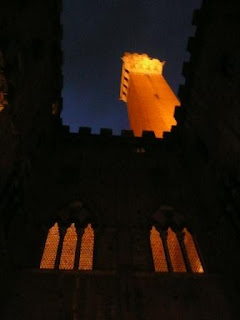