At a loss in Naples

The center of the city and not the Docks at Naples was what we were looking for when we arrived in Naples late the night of October 10, my 69th birthday. The docks are a poorly lit jungle of dead ends and warehouses that we escaped only when a kindly policeman came to our rescue and told us how to get back onto the highway and what exit to take.

Described on its web page as "situated next to Piazza Garibaldi, in the heart of Naples, only 200 meters from the central railway station," the Hotel Garden on Corso Garibaldi. should have been easy to find but the area around the railway station was such a confusing tangle of dim and dirty streets that it took three phone calls to the Hotel receptionist before we found the modest little hotel situated within a block of buildings on one side of the Piazza. 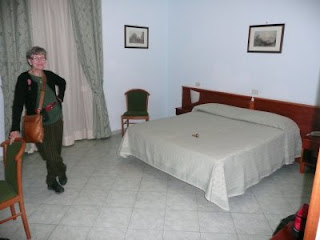 Though "parking" was listed as a hotel amenity, we could find no hotel parking lot so we pulled into an empty place across the street. “Oh you must not park there,” we were told. Another employee drove with him to show him the way to the public parking lot located several blocks away.

When he returned he looked a bit pale. “Did you notice that the Kalos has a vicious scratch along the passenger side?” he asked. I hadn’t noticed it. It must have happened while we were checking in, I suggested. This scrape was to worry us for the entire trip as we were not sure what to do. “We’ll ask Giulio,” I suggested and so we put off reporting the scrape. 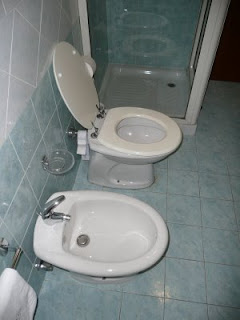 My birthday had so far been a combination of both highs and lows. Our room, sparely furnished and decorated in a 50s style was not exactly a “high” but it was clean, spacious, and had a bidet (we were to become very fond of these wonderful cleansing devices throughout our trip and found them in every home or hotel we visited). Things were beginning to look up. When the receptionist told us that despite the late hour we’d find restaurants open, our situation brightened substantially.

Starving (it was by now after 9:30 p.m.) we went in search of dinner. I was about to walk over what I thought was a dirty piece of cardboard when I saw a foot sticking out from under it. “Bill, there’s a person there,” I whispered, grabbing his arm. There were other pieces of cardboard similarly inhabited in the lot where we’d first parked. Who were these poor unfortunates I wondered, and in what kind of a neighborhood was the Hotel Garden located?

When we found the Ristorante de Mimi on the street directly behind the hotel my impression of the neighborhood went up several notches. So did seeing a bright red Ferrari parked nearby. 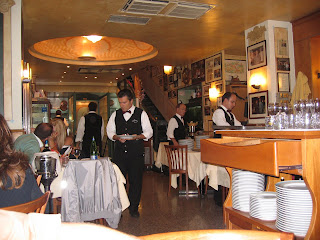 Our meal was the high of our trip to Naples. While we sipped wine and savored a delicious dinner, a Romeo seated near us in a red sweater-vest nibbled on the hands and arms of the blond with him, interrupting his meal only to kiss her passionately; while next to us the owner of the restaurant fawned over a table of big sated-looking men. The supposition that only corrupt politicians and/or Mafiosi would be accorded such ongoing constant attention (we did not see any money offered in exchange for the food and service) brought a sense of intrigue to the end of our day despite the realization that this section of Naples was not what we'd have chosen had we known better.
- January 17, 2009 3 comments:

Don't do Naples on your birthday 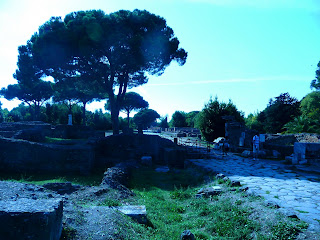 On my 69th birthday, we left Rome for Naples. This was not a wholly good idea, unless one thrives on travel tension.

October 10, 2008 started off innocently enough. We took a taxi to the Termini station where Avis has a rental pick up. Easy right? The taxi ride yes. Renting the car anything but.

Walking several blocks from the rental desk to the pick-up garage would not have been a problem if the carts we rented worked. But they didn't. When the first cart's wheels locked, we got another. When this also refused to move, we complained. The response? Termini’s luggage carts were not allowed outside the building. Their wheels lock automatically. So much for luggage carts. 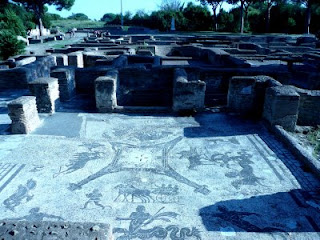 Our largest suitcase, which handle broke at Fiumicino airport the night we arrived, together with our other medium- and small-sized suitcases, made a do-able situation difficult. When Bill's attempt to transport three bags collapsed onto the sidewalk, I turned back to the desk.

"We need to have the car dropped off HERE," I told the clerk, reminding him that I’d seen a car delivered to another couple. Ten minutes later a languid young man in a red jacket drove up in our Chevy Kalos, double parked it in front of the station and disappeared. Getting our bags into the car was easy. The tiny trunk actually held the two largest bags, and the rest fit easily onto the back seat.

Like shedding a heavy wool coat, we shrugged off tension and relaxed as our Garmen directed us out of Rome toward Ostia Antica, which we'd been told we "must not miss." A lovely lunch at a small restaurant in the nearby town followed by a leisurely walk midst the wondrous pines and ruins of the ancient port city put us in a celebratory frame of mind, which began to unravel by the end of the first half hour of what was a three hour traffic jam outside Rome. 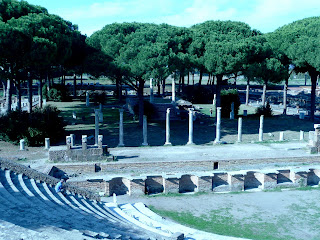 Once out of Rome, however, the reverse occurred. The drive to Naples on A1, the autostrada leading to Naples, tested our nerves and our Chevy Kalos to the limit. The Kalos was not built to drive at 150 km an hour, neither were our nerves. The autostrada is a misnomer. Raceway would be a better term.

It was very dark and very late when we finally reached the outskirts of Naples, whereupon our trust Garmon failed us. It told us to turn when we were already well beyond where we should have turned (at such speeds, who could blame the poor machine) and so we got lost in Naples's Harbor, where as we drove into one dead end after another we felt like the foreigners we were. 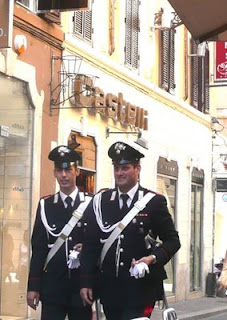 At the small restaurant on Via Mario Fiori we checked the prices for breakfast -- 25€ ($38) for an American breakfast, 35 € ($53.20) for an English breakfast, 18€ ($25.70) for a continental breakfast.The cheapest breakfasts are eaten at a café bar – standing up. Order your coffee and biroche, pay the cashier, eat at the bar. Sitting down costs more. At the open air café on Via Frattina, we decided to sit anyway. I wanted to watch the people on that busy street, especially those gorgeous women of Rome who make jeans and a button down shirt look glamorous. Of course those jeans are often worn with high boots or stiletto heels (how they manage to stride so elegantly in those ankle-breakers is beyond me). The jewel-toned scarves they’ve tossed loosely over their shoulders or about their necks add just the right touch as do their shiny leather bags large enough to hold computers.The men weren't so bad either! These police in formal dress certainly cut an impressive swath along Via Frattini. 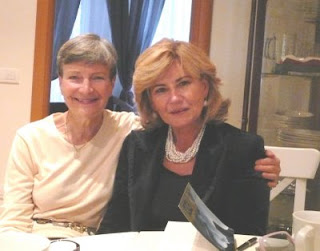 One of those gorgeous women is Vittorio’s niece Teresa who looks as lovely today as she did the last time I was in Italy 30 years ago. We had dinner with her companion Giulio in a hidden treasure of a restaurant, Osteria Casa Della Ioria (Chacco er Carettiere) which is tucked between a brick walkway along the and a bridge. This description of the Osteria's location might be colored by my imagination as I don't have a photo to refer to. I do, however, remember the antique cart in the entrance from which the Osteria drew its other name – Chacco er Carettiere. Perhaps Chacco means warehouse in old the Roman dialect. Carter's warehouse? Can anyone help here? 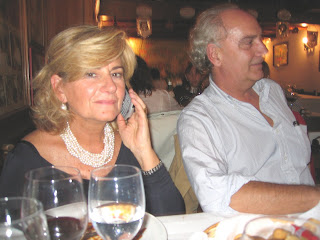