Seattle by day and by night 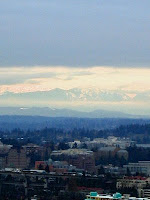 In Seattle, that friendliest of cities, we did something we rarely do. Limited in time and anxious to see all that should be seen, we signed up for two tours, one of the city and one of the Boeing Manufacturing Plant in .

* View from Queen Anne's Hill with Mount Ranier in the distance

I’ve got mixed feelings about such tours because they give only the broadest overview of sights to be seen but it works when time in a particular spot is limited. Here is a running time-table of sites seen while on our tour. 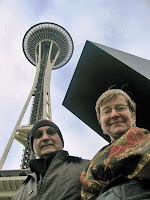 Seattle Center, the site of the 1962 World’s Fair, the space needle, and of the fancifully designed side by side museums of Space and of Rock (musical not geological) our driver gave us 20 minutes to see what we wanted and to take photos. One of our traveling companions -- a businessman from Taiwan -- took this shot of Bill and me under the space needle. The Center was strangely deserted when we arrived, perhaps it was the rather gloomy weather or maybe just too early in the day.

Then it was off to the Klondike Gold Rush National Historical Park and Museum where we had 1/2 hour to explore its riches when I could have spent several days, so engrossed was I in the journeys of the men and women who forged the route from to the in search of their fortunes. Most of you know of Nordstrom's department store but did you know the founder was a Klondike gold-digger. He sold his mine and used the money to begin a shoe-store and look what happened. An empire! 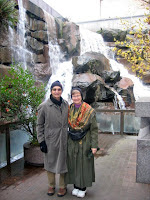 At Pioneer Square, we had 20 minutes to check out the Waterfall Gardens and take a quick peek into the underground city, the subterranean ruins of the great fire in 1899 over which the of was built in brick and stone. With little time to investigate anything here, we succumbed to the lure of chocolate and coffee at a local coffee house in the Square. 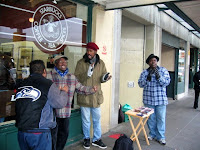 We had 40 minutes to traverse the famed Pike Place Market with its street performers and open air fish and produce markets. The barbership quartet pictured here was so good I could have spent the entire 40 minutes listening. Instead we dashed around sampling locally produced cheeses and wines in lieu of lunch. 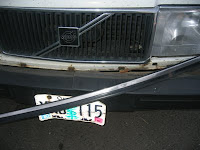 Then up the winding narrow lanes of the Queen Anne’s Hill (please click this link for some spectacular photos of this view) to one of the best views of Seattle. If I remember correctly, this jaunt was not included in the official tour but was provided kindness of our tour guide. So up those narrow residential streets we went in a vehicle much too large for such a jaunt that got a bit too friendly with a parked car while en-route. Because of this encounter, we had more time than we would otherwise have had to enjoy and snap photos of the and Mt. Ranier shining golden in the distance, probably 20 minutes.

Because our hotel was the most distant, and because the tour was running late (hmmmm!) our driver gladly dropped Bill and I off near the world-famous Elliott Bay Book Company – a must see for book lovers. While there I was delighted to find they actually had two copies of my book in stock. I signed these books and then zipped off to check each book store story [sorry couldn't resist the pun]. We left the store with several bags of books we couldn't resist. As our bookshelves overflow with more books yet to be read, we wonder if there is a BA (bookaholic) support group we could join. Any suggestions out there?

Still carrying our bags of books, Bill and I walked to the famed Seattle Waterfront, where we wandered in the lovely evening air and looked for a place to eat, finally settling at ’s most historic seafood restaurant Ivar’s Acres of Clams located on Pier 54 where we dined sumptuously [well, that's a bit of an exaggeration but the food was good] on their famous clam chowder and delicious wild Alaskan Salmon. We then headed off to catch a movie, something we always do when in a city of any size, movie house deprived as we are on Lake Superior's north shore in Minnesota. 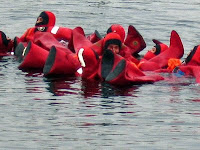 * a group practicing water survival on the waterfront

is spectacular by night, a veritable shining kingdom of lights. On our bus ride to the uphill, upscale, downtown area, we sat with our faces glued to the windows. Returning to the hotel by bus would have taken over two hours and as we had another full day on the morrow when at 6 a.m. we would be picked up for the Boeing Future of Flight and Factory Tour in Everett, we succumbed to the luxury of a taxi back. 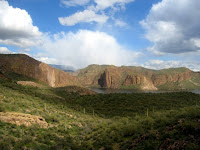 I hadn’t realized when we began our drive to Saguaro and Canyon Lake near Mesa AZ that we’d be heading to the mountain lake my daughter Francesca told me about during her brief sojourn working in Phoenix when she was 19, but as we climbed into those arid mountains her words came back to me.

“Oh, Mama. You’d love it. The lake is tucked right into the mountains. You can’t imagine the view from the rocks. Oh I do wish you’d see it.” Her excitement had bubbled over the phone lines from Arizona to Minnesota. 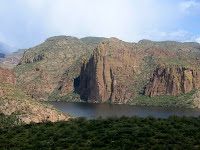 My husband and I had chosen the perfect time to spend a few days in Phoenix. Everything was blooming, including the desert. I was stunned by the wonderful colors of the arid heights – the rocky cliffs striated in ocher and burnt orange, the sweeping expanses of blue and lavender, red and yellow flowers spreading above and below us. 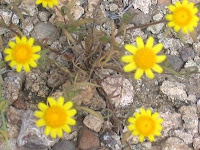 Since Francesca’s death in 2001, I’ve carried that beautiful child with me in my heart to all the places we’d traveled since then. I'd so wanted her to see them. But here, as we topped Canyon Lake she was showing me. 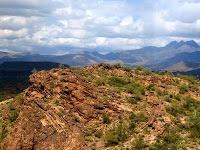 The Star Tribune named Beryl as a "Best of 2006 Authors." Her book The Scent of God was a “Notable” Book Sense selection for April 2006. She is a columnist for the News Herald and has been published in anthologies and periodicals nationwide. 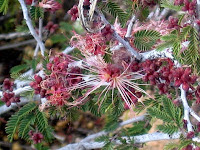