Hot Dog Rolls for breakfast and a day in Capri 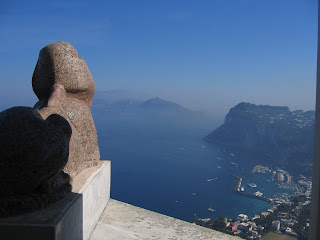 As if she'd been awaiting the exact moment of our arrival on the patio for breakfast the next morning, Rita –Titty’s mother (of La Maison de Titty), hurried out with tiny éclairs with Nutella, coffee, and . . . of all things … hot dog rolls. These rolls tickled our funny bones. We’d hoped for the small hard rolls we’d slathered with butter and jelly in but had gotten hot dog rolls. We did have prosciutto and cheese, however, and I found that these together with jelly (don’t cringe) on dried tostini (melba toasts) made a satisfactory breakfast.

Michele, Titty’s father, was waiting for us when we emerged with our cameras and carry bags from our room to drive us to the port in . After showing us where to wait for the ferry to , he disappeared, reappearing again suddenly with two bus tickets for our return trip to Piano di Sorrento that evening. Touched by this generosity, we found it easy to forgive La Maison de Titty the hot dog rolls for breakfast.

Determined to do Capri by bus, we waited for half an hour in the hot sun before Bill, bless him, decided to hire one of the open-topped cabs waiting to ferry the more spend-thrift tourists around the island. I felt like a movie star with my sun glasses and straw hat as we cruised up and down ’s lush roads on Luigi’s tour. First stop was the Blue Grotto, where with Bill tucked between my legs, and a sweet Canadian woman tucked between Bill’s legs – her husband in front behind the oarsman, we ducked simultaneously as the small boat surged into the luminescent cave, our boatman’s tenor shimmering off the rocks and echoing throughout the chamber. 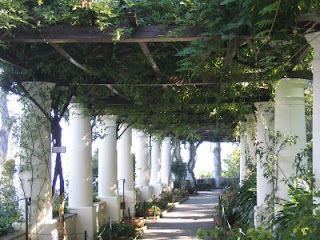 From the Blue Grotto, Luigi took us to Anacapri where we spent a wonderful hour wandering through San Michele, the roman villa that famed physician and author Axel Munch built with what remained of Emperor Tiberius’s old palace. Though crowded with tourists, the site elicited in me a great sense of inner quiet as I roamed about taking photos of the columned porticoes, exquisite gardens, and magnificent views. From there it was back to via Marina Piccola, the exquisite bay with its amazing pinnacled rocks.

Back in Capri, having paid Luigi too much, we went in search of the Gardens of Augustus with views of the surrounding terrain and sea, and then – seeing from that vantage point what looked like a monastery – down to the Cloisters of San Giacomo, which were unfortunately closed by the time we reached them. From there we wandered through narrow alleys and side streets back down to – a walk which could have been called a Tour of Capri Cats because kitties were everywhere: tucked under bushes and into the niches of walls, lying on columns and stairways, or leaping after flies. 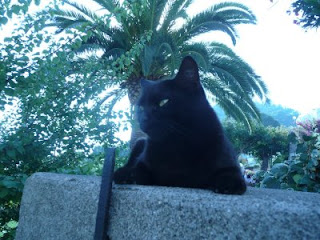 My favorite memory of this trip, however, is not of the scenery or sites, but of Bill’s laughter as he watched the dynamics between a couple nearby.

“Give me some water, will you?” the wife demands of her husband, turning to chat with a group of tourists. Her husband gets a bottled water from the sack he’s carrying and holds it out to her. She keeps on chatting. He keeps on offering the bottle. For a good five minutes he stands there, lifting the bottle toward her, until he finally gives up, shrugs, and puts the water back in his bag. Charlie Chaplin could have made hay with this seedling. 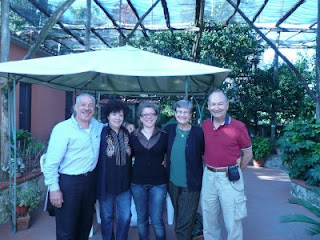 Having raced at speeds of over 160 kph on the autostrada the night before, I find it amusing that I should greet that very same autostrada with relief the following morning. Escaping the snarled suicide rush of autos, bicycles, motorcycles, trucks, buses, and pedestrians around the Naples Termini felt miraculous. We were finally “out-a-there.” (Apologies to all lovers.)

The drive to Piano di Sorrento, where we would spend the next two nights at Le Maison de Titty, was gorgeous with fantastic views of the bay. Finding Piano di Sorrento was another matter. We drove right past the small sign announcing that town and were well on our way to when a phone call to the owner got us back to the town of Piano di Sorrento, north of the city of . The hidden backstreet where the B&B was located continued to evade us. Unable to connect again with the owner, whose phone was busy) we asked a motorcyclist waiting next to a small church. Rather than giving us verbal directions, he led us to Via Legittimo, a narrow cobbled street where the number 38 identified the B&B's location. As we rang the bell in the wall, a solid metal gate opened slowly to reveal a lovely secluded garden. Titty, a exuberant young woman with that wonderful fly-away curly hair I’ve noticed on so many Italian women welcomed us and after showing us our room, settled us at an outside patio and served us coffee with a torte made by her mother Rita while her dad Michele presented a host of siteseeing options and suggestions for places to dine that night.

Having several hours of daylight at our disposal, Bill and I set off to explore the town and find the waterfront. We needed exercise and Piano di Sorrento gave us plenty of that. We never did find the waterfront but instead got wonderfully lost in a maze of narrow alley’s frequented by motorcyclists and residents in their autos that flattened us against the walls and ornate gates behind which hid beautiful homes and magical gardens. In one such garden -- abandoned -- a striped tabby-cat lolled in the dappled sunlight a top a broken pillar.

A steep climb back toward the B&B to find the restaurant Michele had praised so highly required more detective work as we made our way past a park, church, and into and up another narrow alley.

Don’t let the pizza-kitchen-entrance to Risorante Betania deceive you. Behind that deceptive façade is a wondrous cave-like room – dark and candle lit – with only a few tables and a handsome young waiter.

And, for love of God, don’t miss dining at Ristorante Betania either. Our meal there stands out as one of the VERY BEST of all the wonderful meals we ate in . An artistic masterpiece of an antipasto -- fresh buffalo mozzarella, puff pizza, crusted rice balls, melon balls, prosciutto, grilled zucchini, and carrots in balsamic vinegar – preceded the melt-in-your-mouth fall-off-the bone shank of lamb and roasted potatoes. Served with a great house wine and thick crusty bread to sop up all the juices. For dessert crème brulé and panacotta.

Sated and wondrously relaxed we made our way back to the secret garden at Le Maison de Titty and our lovely, secluded room.