Finding wild and out-of-season blueberries on the trail

Blueberries. Wild, ripe, luscious, copious, untouched. Not the tiny wild blueberries we have in , but big blueberries. The size of deluxe cultivated blueberries. We blundered into them while on a grueling hike along the Casque Isle Trail near Rossport on . The season was already well over in but this was blueberry paradise and we’d beaten the bears to it.  We gorged on them until, unable to stuff another berry into our mouths, we slogged on. Our yearning to filch great amounts of the berries dissolved as we tackled the next section of trail. We needed both hands to haul ourselves up the inclines we encountered. 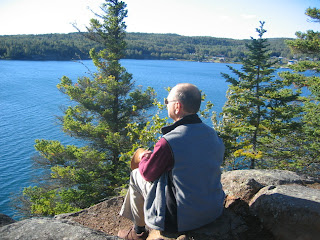 One of our favorite places on the Circle Drive is Rossport, a tiny fishermen’s village at the northernmost section of Lake Superior. We discovered Rossport years ago while making the first of four Circle tours around Lake Superior. There’s not a lot to do in Rossport if you want a commercial holiday. Bill and I have gone every September to celebrate his birthday. Besides catching up on reading, we love hiking the Casque Isle Trail. This September we hiked a new section, and as has happened several times in the past, we lost the trail. We’d hauled ourselves to the top of a particularly challenging section, and lost the trail. We didn’t think we’d lost it. We started down a well-worn section that looked like the trail but as we descended, we discovered that it was actually a ravine and what we were following was a ravine. Having made it safely to the bottom, we scoured the woods looking for the continuation of the trail. With relief, we saw a hiking trail sign and followed it … to the exact same spot where we’d lost the trail an hour earlier.

The view was great the first time, the second time it was not as welcome. On the small spiral notebook left for hikers, I added a postscript to the gushing note I’d penned earlier. “Do something about your signs.” Of course, with a bit more careful searching we soon found the actual trail. The last mile or so, my knees began to give out. Shaky legs, shaky arms, shaky mind. Thoughts of an ice-cold beer pushed us through the final few miles. We enjoyed that beer at The Voyageur, a small, family owned restaurant connected with the Esso station in Schreiber. We downed those beers with big bowls of pasta: homemade noodles and sauce! What could be finer? Well, maybe some blueberries for dessert.
- October 20, 2011 No comments: