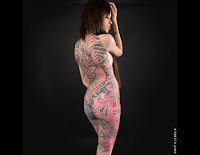 In 1993, my sixteen-year-old daughter Francesca acquired a tattoo without telling me. I thought she was simply spending the weekend with a girlfriend when it was actually a mutiny of sorts.

“Fran, what have you done?” I gasped.
“I knew you’d never give me permission and Kelly was getting one. So . . .” her voice trailed off but she didn’t drop her eyes.
“What is it anyway?” She told me it was a rose but it looked more like a dragon to me, smoking its way toward her knee.
“You realize you’ve marked yourself for life?” Francesca nodded, a smile lurking at the edge of her mouth.

Not long after, Francesca’s older brother Thomas had both his arms tattooed. At the time it scandalized my relatives, friends, and acquaintances. Twenty years later not a day passes without my noting young people and even elders flaunting tattoos that extended up arms and legs to the neck and ears.

On February 25, 2016 I gained a greater appreciation of tattoos when an exhibition at the Morikami Museum and Gardens in Delray Beach Florida featured a “sold out” Exhibition Preview. of Perseverance: Japanese Tattoo Tradition in a Modern World. Who would attend, I wondered? When a Sold Out sign appeared in the museum lobby I realized lots of people wanted to attend!  The night of the lecture/demonstration, the audience was filled to overflowing with people of all ages. Even a baby was there in attendance (an early introduction perhaps?) 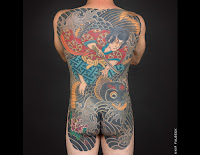 On a blistering hot day a week later, Bill and I viewed the amazing artistry of traditional Japanese tattoos known as Irezumi on exhibit at the museum. Gorgeous life-sized photos of men and women adorned with full body tattoos – front, back, legs, arms – lined the walls. Having watched Horitomo (Kazuaki Kitamura) demonstrate the piercing technique on a slender young man at the exhibition preview, I knew the process was painful and appreciated the exhibition title – Perseverance!

While there we encountered a beautifully tattooed couple. The woman, a nurse, told me she always wore long sleeves  out of respect for the sensibilities of her patients.This reminded me of the time my son, wearing short sleeves, volunteered to paint a church and was asked to leave. His tattoos were an affront to the other volunteers.