Showing posts from April, 2009
Show all

On the way to Assisi: Foligno 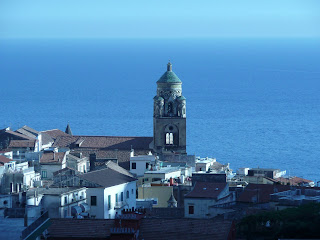 We ate breakfast on the terrace in Amalfi, served by skinny Renaldo who buzzed and hummed about, making an occasional nervous foray into conversation about his marriage to a Russian woman from Eastern Siberia, his three year old child, how he works all night and goes home to play with his child before sleeping in the afternoon – all in Italian mind you. The young man who helped Bill carry our bags to the car, down the numerous flights of stairs, was not nearly as affable.

“For one night in this hotel you need all these bags?” We didn’t bother to explain that bringing all the bags into the hotel wasn’t our decision. The young woman who helped us unload informed us that “Your car will be parked in a public garage,” and insisted everything be removed before giving it to the attendant to park.

Even our GPS had a hard time finding the Delfina Palace Hotel in Foligno where we would spend two nights while visiting Assisi. A new 4-star hotel, the Delfina was a sprawling but mostly empty hotel…
7 comments
Read more
More posts