Showing posts from June, 2009
Show all

Assisi: parking ticket and all 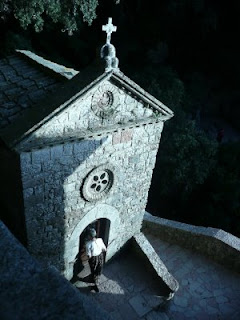 We came to Assisi seeking St. Francis and Clare. We found them. We found, as well, a greeting from the Assisi police: a parking ticket. Parking in Assisi is limited to residents only.

Unaware of the ticket that awaited us on our return to the car, we blithely visited the Basilica of Santa Chiara and knelt before St. Clare's “miraculously preserved” body which, though blackened from its exposure to air, is in much better condition than poor St. Lucy, whose "in-corrupt" body I’d viewed years earlier in Venice.
a chapel at the Carceri on Monte Subasio
We then set off for the Basilica of San Francesco, and happened upon a side alley leading to a small shrine I’d not been to before. The Chiesa Nuova is the home where Francis once lived and where his father – a wealthy cloth merchant -- once imprisoned him.